Well we were supposed to have handover LAST Thursday but instead we had it yesterday, still Thursday just the wrong one. The valuator held us up and didn't come out to valuate our house until Monday which was frustrating plus there were two big scratches on our wooden floors! Needless to say I have sitting around moping eating chocolate and getting fat instead of packing as I took time off work.

An unofficial handover still went ahead last Thursday even though the final payment wasn't being made, so hubby met our SS and a lady from Metricon at the house for final documents and warranty things to go through. They made Stu wait out the front for 10 minutes to get things ready and upon entering the house my husband was met with two large scratches on the floor where somebody (plumber) had scraped the floor getting our oven in. Husband as you can imagine was not happy at nobody mentioning it to him before he went in, it was kinda like the last straw really and made SS call Andy from Carpet Call immediently to have someone come out to fix it. We also realised later on that the two cabinets either side of oven had marks as well and will be fixed. Way to put a downer on handover.

So flooring ended up being replaced in that spot, they couldn't touch it up and cabinets will be looked at on Wednesday as kitchen company is coming down with two replacement doors for another area of our kitchen. We still have an ongoing issue regarding our gutters at the front that still have not been rectified and has been a source of great stress for us. This issue was picked up by our inspector at framing stage and was at the time thought to be a minor thing, we told at each stage it would be getting fixed by chippie but it never happened and now what was once a seemingly simple problem is now in our eyes not. SS did have the framers out to readjust the guttering but it is still not right but our SS disagrees and sees nothing wrong with the guttering and we have had to take it further up. After photos were sent and an email it was agreed to have the framers back out but were then told by the framers that there was nothing further that can be done. This was so maddening  as we know that there is an issue as visually it doesn't look right, so just fix it!

SS was not there for the second handover yesterday as he is away as his wife is due to have a baby. Let me say he was not missed by us. Instead we had his boss and my husband told him to get up on the ladder and just have an actual look to see what the issue was and to try and make them see sense that it needs to be rectified. He agreed to have someone else to come out. I'm not sure how much faith I have about this as this will be the second time but we will see.  We have already rang HIA and if it is not rectified we will be seeking their assistance.

So that is where we are at. Whilst we are happy we have keys it has been overshadowed by this gutter issue. I will admit I haven't been out to the house since our first PCI  so I have no idea what the end result is, I decided to just leave it to husband and the house building gods. I will say that Metricon have been good about rectifying just about anything else that has popped up as things do when you build and have always abided by everything in our contract, no complaints there. They have told us to call if there are any major issues. Doors and locks were adjusted  yesterday by a lovely guy from A&L and garage door was having a service this morning too.

So moving day is today and I have only packed a quarter of our stuff. I know shock horror. I have been selling of lots of our stuff as I decided I would rather move in with nothing and have empty rooms and start afresh when budget allows. The thought of what work is still to be done like landscaping and lights still to be put up, we don't even have a mailbox or clothesline yet is overwhelming but we will get there.

So after many arguments between my husband and me (we had a beauty yesterday, you know the type where you bring up things from 10 years ago) we have keys. I'm off now to do some rushed packing as I have a ballet Eisteddfod all day Sunday and also need to drop off a bed to a buyer. Eeep!

Thanks for following along and I'll still keep posting about our journey post build if that's alright? It should be marginally interesting with no budget. Perhaps a name change too now that the build part is over. 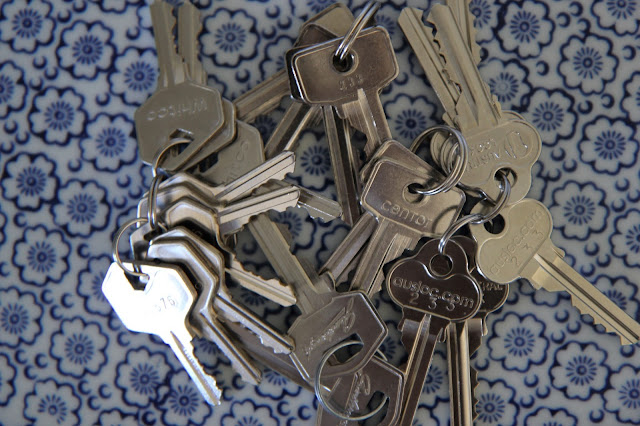