If all goes to plan we should have the house handed over to us this Thursday. To be honest with husband travelling and me working everyday and the girls after school activities I have no idea whether everything that needs to be done etc bank valuations and final payments will all be lined up and done by then to make this happen but this is the plan. After waiting so long it seems I am completely disorganised and really I think I have just run out of steam towards the finishing line and I am just leaving it to Stu to organise everything.

Stu went out about 3 weeks ago now and had another walk through with the SS to see if there were still any issues, I didn't go this time but he seemed to think it was all coming together. I haven't been out to the house since the first pci walk through so haven't seen the kitchen handles on or our kitchen pendant lights up only pics. Really I have no idea if everything is up to scratch. I will say that the SS was quite thorough with picking up paint defects some of which we were not really concerned about and then were some other issues that he didn't feel was such a big deal that we wanted fixed. I have to say having an inspector with us was invaluable and he picked up so many things that we were all missing and by the end of the day (we were there all day) I think the SS had had enough of him lol.

I think I just kinda decided to step back from stressing out about everything that needed doing and to just let be what will be with this house. With my last post I think I was just at that final stage of house building where everything is mostly done but yet at the same time so many little minor things still remain that you feel it's never going to be finished. Stu and I have never really been impatient to get into this house, right from the start we just wanted a quality finish that has always been the most important thing. We could have actually had handover a week ago but due to Stu travelling for work we moved it back to this Thursday.

The painter had been out there I think for about a week and even worked Saturday and Sunday prepping. We were very happy with M's choice of painter and he was a lovely guy. Our tilers too were fantastic.

Our fence has gone up. Husband did a great job of organising this for all our neighbours, he chased up names and  phones numbers of everyone who had an adjoining fence to us and organised a quote from a fencer who had done the neighbours across from us. He seemed to do a decent job we noticed and his quote came back very reasonable. I think we share fencing with about four other couples so Stu organised to have it quoted for each couples share of fence. It has worked out great except for the young couple up above us who have still not paid and have had their mother corresponding questioning the amount. I think it is around $400 so hopefully it sorts it self out and they pay for their portion.

Our stove and dishwasher have been put in although last time Stu looked our stove was connected but not sitting in its spot, this is due to our skirting running along underneath it and the kitchen company needs to build a shelf or something to sit underneath it so it is level with our benches. Range hood of course will go in after handover, this is another detail I have left to my husband and I have no idea if it will slot in and line up with our already laid tiles.

So that is kinda where we are at, husband should have wrote this update as he is the one who has been out there and knows what is going on. I do know the house is having another clean the day before handover too. There is still so much to do and I have so much furniture that I want to sell off so that I don't have to move it out into the new house, I would rather move in with no furniture then a lot of stuff junking up the place that I just don't want. I need to purchase quite a few things too but I am too indecisive and also I don't have the budget right now. Concrete people is soooo expensive and I could go on an extravagant overseas trip with what we are going to have to shell out, heart stopping numbers. I just think of all the furniture I could buy or concrete, not fair. Not to worry we will eventually get there.

How about a quick iphone pic husband took of our kitchen pendants. 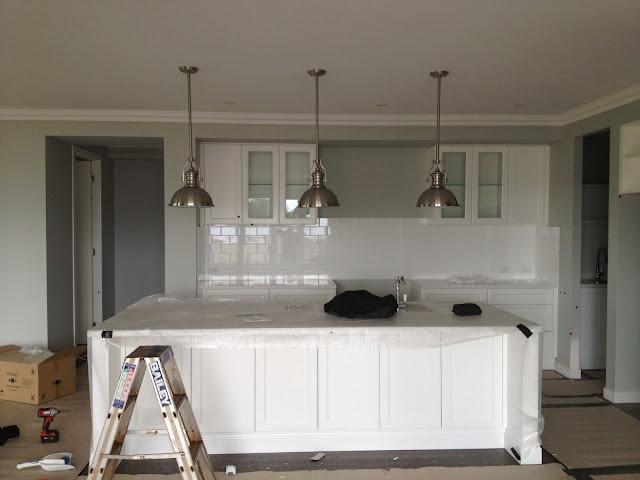 Should also say that our kitchen guy that we have been dealing with rang my husband to tell him he had finally seen some pics of our kitchen and he loves it, in fact apparently everyone there loves it and I think they are pretty proud of themselves with this being the first time they have done this style of kitchen.

Also I just wrote this big long post and forgot to say that the SS also rang to say that some head guy or quality checking type person came to look at the house and gave it 100% score which is apparently the first house in Toowoomba to get that score. Makes me feel good but I am also a tad cynical (I can't help it it's in my nature) and think he tells that to everyone but still it was nice to hear...I think he must have just liked to finally see a M house that looked a bit different.